Why am I driving this sexy little roadster? 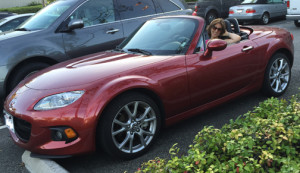 My car is in the body shop getting repaired after a hit and run. The car rental company took pity on me and gave me this car to drive for the 2 weeks it’ll take to repair my car. Considering I have to pay my deductible to get my car fixed and get the rental, it didn’t come cheap. I’ll have to add that to my running total of expenses due to road hazards. Still, enjoying this car does admittedly help take the sting out of what happened. It’s also making me rethink the kind of car I’ll buy next!

So here’s what went down… A couple of weeks ago, I was driving on PCH (our scenic coastal route Pacific Coast Highway – for those not in the know). I was returning home after a fun day at the beach and lunch in Malibu. Of course, I was stuck in gridlock traffic, the bane of my existence. At least it was a beautiful summer day and I could stare out at the ocean while not moving on PCH.

Then, all of a sudden, a jolt to my car knocked me out of my zen state. I had no idea what the hell happened? I looked in my rear view mirror and didn’t see anything. Then, in the flash of a second, 4 motorcycles splitting lanes on my right side went zooming by. One of the sons of a bitch hit my car and they all kept going not even looking back! There’s no way they didn’t know what just happened. I believe it was the first motorcycle in the pack that hit me as it was the largest and widest motorcycle. He had the first spot in the pecking order of motorcycle packs. This Big Kahuna is no doubt compensating for a smaller part of his anatomy.

I still am in disbelief. They took off so fast, I couldn’t get the license plate of any of the motorcycles. It’s as though the first motorcycle hit me and the ones behind covered him so I wouldn’t be able to see his license plate, not that it will help apprehend someone — keep reading below and you’ll see why). Because I was in complete gridlock so there was no way I would ever be able to catch up to him either. Great scenario for him. Not so much for me.

Later when I got home I took a look at my car. There were deep scratch marks running pretty much across the back side and mid side including the rear tire of my car. Estimated repairs — $2,600.

This isn’t the first time I’ve been the victim of a hit and run. It has happened sadly plenty. Once, I was hit from the rear and the guy sped off. I took off chasing him and got his license plate. He saw me chasing him in his rear view mirror. I’ll never forget those beady eyes staring back at me, seemingly nervous that I would catch him. I figured it was probably best to let him go as I certainly wouldn’t want to become the victim of a more serious crime. A wise move. As it turned out, when the police traced the license plate, not only was the registration on the car expired, but it was also reported stolen. I don’t know if the guy was ever caught. I was out the cost of my deductible.

Another time, there was a guy ahead of me driving a pick up truck on the freeway. The back bed was filled with stuff; seemed he was moving. Then, all of a sudden glass from presumably a coffee table flew off the car and crashed on the freeway in front of a Lexus in the lane to my left. I’m sure he got it worse than I did, but the glass chards flew on my car, cracking my windshield and chipping paint. Once again, I chased the car so I could get the license plate. I reported it to my insurance company only for them to tell me that he denies being there and there’s nothing they can do about it. Out once again the cost of my deductible.

Frustrating to say the least.

Living in Los Angeles, most of us are forced to drive everywhere. There’s just no good alternative public transportation for most geographic areas around the city. We put our lives in peril day in and day out to get where we need to go. Poor City planning has created a situation that is becoming increasingly unmanageable. People dodge in and out of traffic because they’re tired of the gridlock. Motorcycles split lanes. Cyclists ignore the rules of the road entirely. When you stress people to the hilt, they take on behaviors that they might not ordinarily exhibit. Of course, when you stress people who are already inclined to be jerks, look out! Who knows what they’ll resort to when stress is added to their already on edge personalities.

I have a lot more to say about motorcycles and splitting lanes as well as cyclists completely ignoring the rules of the road. I’ll leave that for another post though.

Drive safely out there!