Archive for Color of Car Personality

Car Shame of the Day

The guy below on the right in the little black Ford drove up the right shoulder bypassing the two lanes of cars patiently waiting to get on the freeway. Way to go! You got about 5 cars ahead before coming to an abrupt stop on the freeway because of traffic.

(Note the color of the car and my assessment of what the color means in my last post!)

Also, be sure to check out the Car Shaming Page if you haven’t seen it lately. Got any car shaming pictures to share? Send them to me and I’ll be happy to post. 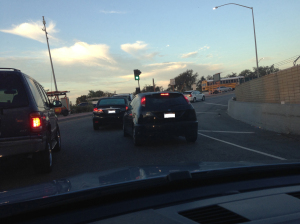 Car Shame of the Day

Last Friday, I noted that people who drive light colored Priuses seem to drive annoying slow. I know this because I’m often stuck behind one. Interestingly, if you, however, drive a Black Prius, the same does not apply. It got me thinking about how the color of your car tells something about the kind of driver you are, or at a minimum it reveals some of your personality traits.

Color is important in a car after all. If you don’t believe me, according to ForbesAuto.com, a General Motors’ lead designer for exterior colors on cars reported that nearly 40 percent of customers who walk into a dealership will leave and go to another dealer if they can’t get the color they want in a car. So, it stands to reason that color says something about who you are.

Here’s my take on car colors and what they mean.

Beige – drivers of beige cars tend to be dependable and flexible. You adapt well to your surroundings and blend in well. You are more likely than other colors to let other drivers in when they signal.

White — White has long been considered a color of purity. It’s also a practical color when it comes to cars. It doesn’t show dirt easily and it doesn’t fade like other colors do. It says clean and fresh looking. So if you drive a white car, you are likely to be practical, stable and low maintenance. You won’t be the sort of driver who zips in and out of lanes trying to get ahead. You’re by and large a patient driver. The biggest problem with white car drivers is going too slow and annoying the people around them. More often than not, the car you’re stuck behind is going to be white. Think about the snow birds in Arizona. (For those who don’t know, snow birds are elderly drivers who have moved to warmer climates for the winter.) They all drive white cars! Last point, if you have only ever driven white cars, you need to step out of your comfort zone and live a little.

Red — Red is a color of passion, power and attention. If you drive a red car, you long to be noticed. You may drive faster than a white car, but you’re not the fastest on the road and you don’t care to be. You know you’re calling more attention to yourself just by being there. That includes police attention and you want to avoid that speeding ticket. Good move.

Purple – Purple is a creative and original color, but not for a car. The music group Train cites in their song “50 Ways to Say Goodbye” a “crappy purple Scion” as one of the 50 ways she dies. Better off wearing purple, don’t drive in it.

Orange — Orange is in fact the new black. No one gets stuck behind a slow orange car unless he rear ends the car and I wouldn’t advise that because the driver will go off on you. Orange car owners may be a little too into drama in their lives, but they love excitement and have no fear. This is the car that will take the drag race challenge.

Blue — Blue connotes stability. People in blue cars are purposeful and dependable. I’m not just saying this because I drive a blue car. You seek a sense of calmness and order, two qualities that are seldom present while driving in L.A. In order to cope, you create your own sense of reality. Heck, I started a blog about driving!

Black – you want to appear impressive without being too flashy, though you still do seek status from your car. You also like to maintain a little mystery. You are, however, the most likely colored car to cut someone else off on the road. It’s that rebellious streak in you. Did you know black is most often chosen color for luxury vehicles?

Silver — You like to blend into your surroundings, not be noticed too much and go with the flow. Others may perceive you as a little standoffish. You give the air of being cool and calm. You tend to be more of a conformist than you care to admit. You are also more likely to keep up with technological innovations.

Green – You love nature. You have an upbeat attitude for the most part, but can be a little moody and inconsiderate. It’s in those moody moments that you’re not likely to let someone in who signals. You also strive for material wealth.

Yellow – Yellow is the most highly visible color. Think about it — street signs and warning signs are in yellow. If you drive a yellow car, you have a lot of enthusiasm towards life and exude confidence. You can be analytical and critical of others too. If you’re driving a yellow Hummer though, you’re just arrogant.