Archive for Life on the Road 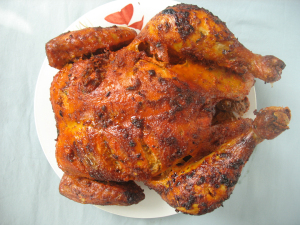 All this for a $5 roast chicken!

Yesterday against my better judgment, I found myself shopping at Costco. It was late Sunday afternoon, just an hour before closing, which on a normal day means I can pretty much zip in and out quickly without too much stress. Apparently not yesterday. Maybe it was due to daylight savings time. We were all somehow thrown off our regular schedule. All I wanted was a roasted chicken for dinner.

I typically shop at the Culver City/Marina Del Rey Costco location. The traffic at this location is undoubtedly the worst of any Costco location. I challenge you to find one that’s worse. There are simply too many cars and people in too concentrated of an area. When that happens, as we all know, people get stressed and all hell breaks loose. The Lincoln/Washington intersection and surrounding streets feel the stress day and night. It’s become one of the top gridlock areas on the Westside. It can take 10 minutes or more just to get through that intersection during the height of rush hour. The parking lot is a hazard in itself. I’d like to know who designed the layout. Plus, there’s hardly ever any parking so when a car sees an available spot, he guns the engine to get there before someone else beats him, thereby creating an atmosphere akin to Nascar, complete with fights.

Yesterday, it all started when I pulled into the parking lot. Those who drive into the parking lot do not have stop signs. Those who are struggling to get out of the lot DO have stop signs; however, no one pays attention to them. This is where my first near collision occurred. I pulled into the Costco driveway and proceeded to turn left inside the parking lot. A woman (dare I say in a black colored SUV) just didn’t want to wait to turn. She missed hitting me by a fraction of an inch. (I’m picturing Maxwell Smart saying, “Missed it by that much!”) Collision #1 was thankfully averted.

I then proceeded to the end of the parking lot as people tend not to fight over parking spaces there and I don’t mind walking. This parallels my driving behavior on the road as I often drive out of my way to avoid a bad traffic situation. It’s just easier.

I worked my way through the hoards of people, headed to the back of the store, ready to pick up my roasted chicken only to discover there are none left. There were about 25 people standing around waiting for someone to put out more chickens. I couldn’t believe my eyes. This trip could not be in vain. I felt like I was stuck in one of those police blocks on the freeway where everyone is at a standstill and has someplace to be, but they can’t go. So, instead, they inch forward to get as close to the front as possible so they take off just as soon as its possible. We looked like cattle. I almost started mooing. Then it got nasty. Some people pushed their way to the front. Others patiently waited. The chickens finally arrived and one by one they were yanked away. I did get my chicken. It was then time to navigate through the store, down the aisles (aka mean streets), and head to the check out area, the next hurdle.

As I worked my way through the store, I was going down the main artery and a woman with a shopping cart on a side aisle cut me off! She went right in front of me, actually put her arm out and pushed me backwards so she could get ahead. I was stunned. I looked at her and said, “Are you kidding me?” She glared at me, continued on, plowed ahead pushing her way through without any regard for anyone else. I can only imagine what she’s like in a car. The funny thing is she looked like the sort of person who would be hauling her 6 grandchildren in a minivan. Incongruous. If this made the news, the headline would have been — Grandma loses it in Costco. Had we been in cars and ended up in a collision, I do believe the police would have ticketed her, maybe even arrested her!

Life, however, sometimes has an interesting way of equalizing these things and redeeming one’s faith in humanity. The lines at the front were exceedingly long, so I picked one and just waited. The lady in line in front me noticed that I had one item and offered to let me go before her. So did the person in front of her and the next person and the next person, until I was at the front of the line, able to check out and go on my merry way.

The exit from the parking lot was not bad all things considered as I was well positioned to exit given my parking location.

We live in this urban jungle called Los Angeles. We love what the city has to offer. We go about our every day lives, but because of overpopulation, too many cars, no good alternative means of transportation, it’s not easy to get things done. It often takes far longer to do errands than if you were in say Pleasantville. This endless hustle and bustle causes stress and makes people do things they might not otherwise be inclined to do. On the other hand, it may just give them another avenue to express who they truly are.

Drive safely out there, that includes shopping carts. Have a good week!

P.S. Costco really does have the best tasting roasted chicken. They didn’t pay me to say that. I wish they would!