As I mentioned in a previous post, if you’d like less Presidential Motorcade disruptions, support Campaign Finance Reform! 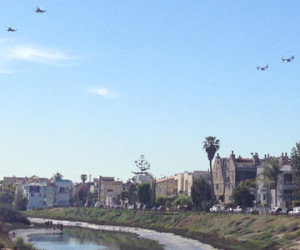 Obama has officially left the city

Avoid like the plague! The presidential motorcade is back. 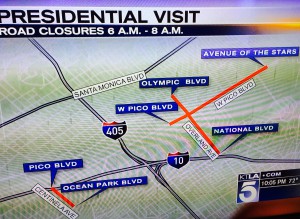 Can you Imagine Driving in a City Where Stepford Wives are Driving?

Sorry for the delay in my post, but I just returned from spending a weekend in Tucson, Arizona. I witnessed something I don’t think I’ve ever seen on the roads in Los Angeles — an open lane, I mean wide open. The lane was under construction more than 1/4 mile up the road. There was a sign that read “Merge Left — Lane Closed Ahead.” We know those signs. They’re on every other road we traverse in Los Angeles. The funny thing is people were actually heeding the message, not at the front of the lane where it was closed, but about 1/4 mile back. Do you get what I’m saying? The lane was wide open with NO cars. What was an even more bizarre sight to see, the cars in the left lane were lined up that 1/4 mile distance one right behind the next. No one was vying to get as close to the front of the right lane as possible before merging. No one was attempting to cut anyone off because they couldn’t wait their turn. I’ve truly never seen anything like it driving in Los Angeles! I wanted to take a picture, but it wasn’t safe and of course being the driving trailblazer that I am, I drove up to the front of the right lane before merging. I was the only driver who dared. I have to confess, it was enormously satisfying to bypass all the traffic in the left lane in mere seconds. What can I say; I’m a Los Angeleno through and through.

This experience left me feeling like I was in a parallel universe where people not only obey the rules of the road, but they also take on a Stepford Wife demeanor. They slow down when someone wants to change lanes. They let people in ALL THE TIME. They use their signals. I will say, I saw one car not signal on the road, but he had a NY license plate. It wasn’t such a big deal though because everyone drives so slowly already!

Are all Tucsonans exceptionally considerate? Or perhaps all Los Angelenos are just rude? It’s stress. Clearly, we drive in a city that is bursting at the seams. It’s a natural response to want to get out of the situation and move ahead as quickly as possible. We’re so programmed to drive offensively, it’s just become second nature to be impatient when we have to wait.

When I returned home to Los Angeles and got in my car, I decided to see how long I could drive like a Tucsonan. It was a test. I would not outpace the speed of traffic on any road I traveled. I would let people in my lane. I already do signal, so that’s not an issue. But, I would be patient and considerate. And so I was … for at least an hour.

My Life on the Road – What a Morning!

You ever have one of those days where every driving choice you make is the wrong one? You change lanes hoping to get ahead, but somehow end up farther behind than if you stayed in the same lane. It almost feels like you’re moving backwards. It’s been one of those mornings for me. You would think that I, more than anyone else, would know better than to get stuck in the Obama traffic nightmare.

Here’s my morning and how it went down. I had a doctor’s appointment in Beverly Hills at 9:30 a.m. (Don’t worry Mom, it was just an annual check-up.) I allowed 50 minutes to get there from the Marina. That should have been adequate. After all, it used to be that Friday morning traffic was light in Los Angeles.

Before leaving my home, I checked where the Obama Motorcade closures were so I could avoid any delays. I consulted with my bible — Sigalert.com — and knew to avoid the freeways. I was feeling pretty smug. I’m in the know. I know where to avoid the traffic hassles! Well, the traffic Gods were laughing at me, cackling really. As I headed East down Venice Blvd. past Overland, I suddenly encountered gridlock. The traffic all but stopped entirely. I sat for about 15 minutes moving maybe 50 feet. I’ve been fasting since the night before, which means I’m already a little cranky. I haven’t had my morning coffee and I’m hungry. I’m not a happy camper.

I then called KNX 1070 Traffic to report (and find out) what’s going on there. Yes, I have 1070 on speed dial. Next time you hear a traffic report, be sure to listen for them mentioning Tipster Marci. Come on folks — I live in my car. This is one of my important survival techniques. So, I was told that I was stuck because of the Obama motorcade. “No! That can’t be!” I declared. “I checked to see where he was going to be and avoided that area. He’s supposed to be in the Westwood/Century City area, not where I am!” I was told that we’re not always told exactly where he’ll be. So, at my first opportunity, I made a U turn and headed back towards Overland. I could take Pico across and avoid Century City. Good. It’s fine. A delay. I’ll be a little late, but now I’m moving along nicely. Then, suddenly, I see the sign. LANES CLOSED AHEAD.

Here I go again. As I’m listening to 1070, I hear the next traffic report. They talk about Obama and the road closures and then say, “By the way, it seems there’s road construction on Venice Blvd. heading East from Overland. It’s down to one lane. Avoid that area if you can.” I didn’t mention my name this time, so no Tipster Marci credited for this. I get through the Overland construction, head down Pico eastbound. I see multiple police vehicles parked along side Rancho Park (a sign that Obama is headed that way soon). Thankfully, I stayed ahead of the motorcade and got to my appointment about 15 minutes late. 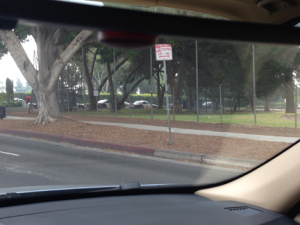 So now, I’m at the doctors and declare that I think my blood pressure is going to be extremely high after that drive. The doctor asked why. I told him explaining that I write a blog about driving and I should have known better. He then asks me where the Obama closures are because he’s heading out of the office shortly and wants to avoid that area. I bring up my post and read it to him. He looked at me and said, “I think I’ll go home instead.” Yeah…

Appointment done. I picked up a large cappuccino on my way out of the doctor’s office building and I headed back home. (This place oddly has exceptionally good cappuccino.) This time, I take the freeway back — 10 to the 405. Mercifully, no driving issues. As I’m making that transition from the 10 to the 405 South, I see 3 military helicopters heading east in the sky with two F-15 fighters following behind. (Wish I could have gotten a picture of that!) I raised my coffee to the sky, leaned back in my seat and sailed home.

The area around Wilshire Blvd. between Veteran Avenue and Comstock Avenue from 9 – 11 a.m.

The area around Beverly Glen Boulevard between Ashton Avenue and Bellagio Road from 9 – 11 a.m.

The area around Sunset Boulevard between Hilgard Avenue and Carolwood Drive from 10 a.m. – 1 p.m.

The area around Beverly Glen Boulevard between Bellagio Road and Pico Boulevard from 10 a.m. – 1 p.m.

The area around Pico Boulevard between Prosser Avenue and Century Park East from 10 a.m. – 1 p.m.

Some bus service will also be impacted, as the Metro Bus Orange Line route 302/2 on Hilgard Ave between Le Conte Ave and Weyburn Ave would be cancelled from 11 a.m. Thursday – 4 p.m. Friday, a news release from LAPD stated.

Obama’s in Town, Blame Gweneth Paltrow for the Bad Traffic

Obama is in town today. Gweneth Paltrow is hosting a fundraiser for him so you can blame her for your traffic nightmares.

Here are the road closures as promised. Avoid these areas at all costs!

He’s around tomorrow too, heading inland to San Dimas. No info yet on any closures.

Demand Campaign Finance Reform and you’ll have far less of these road closures in the future!